WELCOME TO THE WIKI

We’re a collaborative community database about Umibe no Étranger edited by fans. See more about contributions here if you want to help out! 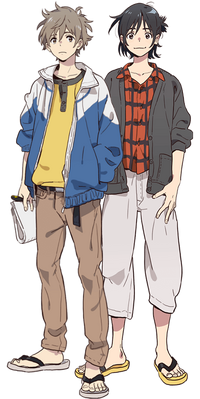 Mio had lost both of his two parents and was often seen sitting on a bench until very late, watching the sea, near Shun's house.

They slowly grew closer to one another, but Mio suddenly had to leave the island, to pursue his studies...

Three years later, Mio returns to Okinawa: "I've been thinking a lot these last three years... Even if he's a man too, I love Shun."

Anyone can contribute to this wiki.

To contribute a Umibe no Étranger article, simply enter the article title in the box below:

Find out more about the Umibe no Étranger movie!

Retrieved from "https://umibe-no-etranger.fandom.com/wiki/Umibe_no_Etranger_Wiki?oldid=164"
Community content is available under CC-BY-SA unless otherwise noted.